My Rich Uncle, or MRU Holdings, Inc., helped students and parents access private student loans to pay for a college education. The company shuttered amid the financial crisis in 2008 and sought bankruptcy protection. The loans it made to borrowers didn’t go away. They were sold to different student loan companies, banks, investors, and so on. These debts are still causing issues for people today.

If you’re looking for a way out of your My Rich Uncle student loan debt, then you’re in luck. There are three options to get rid of your loans: negotiate a settlement, file bankruptcy, or stop paying and wait for the statute of limitations to end.

I’ll go over each below.

Related: How to Apply for Student Loan Forgiveness

Negotiate a settlement. It’s possible to settle My Rich Uncle student loans once your loans are in or near default. Private student loans typically enter default after you’ve missed at least six straight months of monthly payments. Late payments will be reported to the credit bureaus for you and your cosigner, damaging your credit scores. But the tradeoff is that you may be able to negotiate a private student loan debt settlement that saves you tens of thousands of dollars off your loan balance. Read more about how to settle student loan debt.

File bankruptcy. If you can’t cut a deal to settle your MRU loans or don’t have access to a bunch of cash, bankruptcy may get the result you’re seeking. By itself, bankruptcy won’t get rid of your loans. But it will allow you to file a lawsuit, known as an adversary proceeding, to ask the court to erase the debt. During that process, you can contact My Rich Uncle’s lawyer to share details about your financial hardship in hopes of negotiating a settlement that lets you pay significantly less than you owe over several months or years. Read more about student loan bankruptcy.

Stop paying. Lenders have to sue you within a certain period of time after your loan defaults. If they don’t, they’ll have lost the right to sue you, leaving them without a way to force you to pay the loan. This option is risky. You could be sued before time runs out, putting you at risk of wage garnishment or having money taken from your bank account. Check your promissory note to discover what state law controls the contract. For example, if you live in California, then My Rich Uncle has four years from your date of last payment to sue you. But if you live in Missouri, they have a decade.

What was My Rich Uncle

My Rich Uncle was an online lender founded by Raza Khan and Vishal Garg. The pair, who met at an elite New York high school, sought to help students finance their college education by offering student loan products with interest rates lower than they could get from the federal government.

At that time, the Department of Education outsourced federal student loan lending to private banks and lenders like Sallie Mae. The loans, which were made through the now-defunct Federal Family Education Loan Program, had high-interest rates that weren’t based on a borrower’s credit score or other factors that reflected their creditworthiness.

My Rich Uncle sought to fill that gap by offering rates up to 1.5% percent lower than the fixed and variable interest rates available from the federal government. To meet its goal, the founders used a proprietary algorithm based on Milton Friedman’s “human-capital contracts” lending model. The software would review applicants’ transcripts, school, course of study, and other information to predict their future earning potential. As a result, students with stellar grades in majors that the labor market rewards with higher pay may qualify for a rate lower than a liberal arts graduate with a spotty academic record.

With funding from investors like Merrill Lynch and advertisements that criticized the existing lending model, which universities’ financial aid offices heavily controlled, the company launched its website, myrichuncle.com, and quickly made a splash in the federal student loan market. 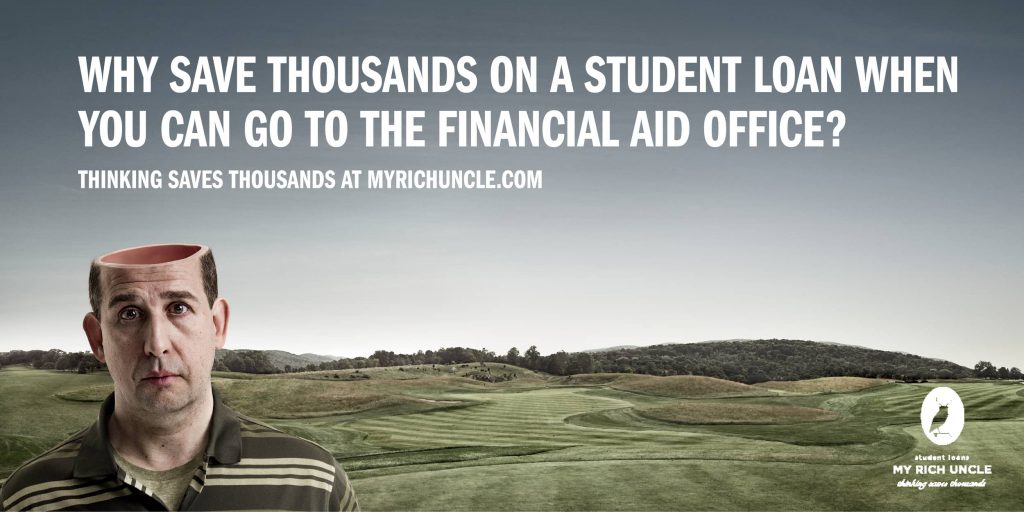 Advertisement from the My Rich Uncle campaign against financial aid officers.

A short while later, it offered two types of private student loans as well. The standard loans were reserved for students with good credit histories or a cosigner with the same. The second type was for people with a poor credit history. They would get approved for a loan that offered a sub-prime variable interest rate that could climb past 10% depending on changes to the LIBOR index.

Things were going well for My Rich Uncle. They originated nearly a half-billion dollars in loans, and in 2007, the student loan market saw 27% growth. But that success came to a screeching halt when the credit crisis hit the US economy. Like credit card debt and mortgages, student loan debt was heavily repackaged and securitized, making it susceptible to the same risks that plagued those debts.

My Rich Uncle had trouble raising capital as the market got tighter. They stopped making new loans and, in 2009, declared bankruptcy.

In an ironic twist, the company used the bankruptcy process to discharge its debts and start over without facing scrutiny over its expenses or having to answer questions about its plans or ability to improve its financial situation, as student loan borrowers must do to receive the same treatment.